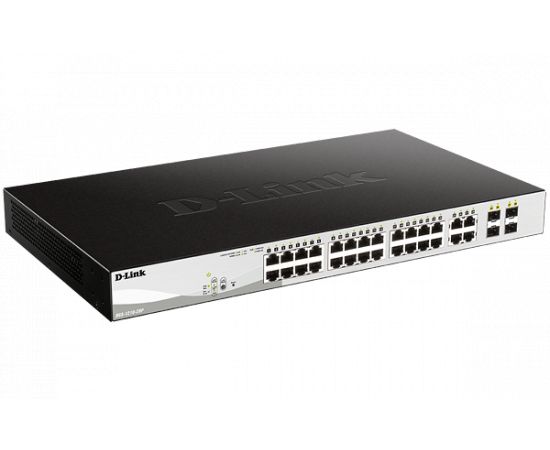 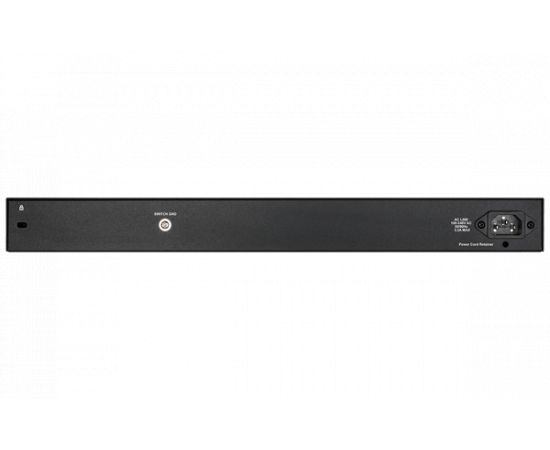 The D-Link DGS-1210 Series Smart Managed Switches are the latest generation of switches to provide increased Power over Ethernet (PoE) output, a range of physical interface types, multiple management interfaces, and advanced Layer 2 features. With all of these features combined, the DGS-1210 Series provides a cost-efficient and ﬂexible solution for expanding any business network. The DGS-1210-28P is a PoE Smart Managed Switch that provides 24 10/100/1000 Base-T PoE ports with 4 Gigabit SFP/RJ45 Combo ports.

The DGS-1210 Series includes a wide range of port and media types, including 10/100/1000BASE-T RJ-45 ports, 100/1000 Mbps combo ports, and 100/1000 Mbps SFP ports, allowing you to choose the most suitable media type for your requirements. The DGS-1210-28P switch comes with 24 PoE Gigabit copper ports capable of connecting to existing Cat.5 (or higher) twisted-pair cables. Additionally, the last 4 ports of the DGS-1210-28P offer either RJ45 or SFP connectivity and therefore provide an option for upstream or downstream server connections via fibre interface. Using the default presets, the administrator can quickly set up the switch without reconfiguring any settings.

All DGS-1210 Series PoE switches include support for IEEE 802.3af/at and higher power budgets, allowing more PoE devices to be powered by the switch and for devices to be installed in remote locations without immediate access to power outlets. The DGS-1210-28P delivers Power over Ethernet (PoE) capabilities, making deployment with IP cameras, VoIP phones, and access points much easier. The DGS-1210-28P complies with the 802.3af (PoE) and 802.3at (PoE+) standards and supports a 193 Watt power budget.

The DGS-1210 Series supports Auto Voice VLAN and Surveillance Mode, which allow voice and video traffic to be automatically identified and handled diﬀerently to regular network traffic. Auto Voice VLAN detects Voice over IP (VoIP) traffic and automatically segments it from the rest of the network, increasing security and allowing Quality of Service (QoS) to be applied. Surveillance Mode detects compatible ONVIF cameras and places them in a surveillance VLAN, allowing a single switch to be used for voice, video, and data, removing the need for dedicated hardware and reducing maintenance costs.

The DGS-1210-28P can be managed with the D-Link Network Assistant Utility that enables administrators to remotely control their network down to the port level. The D-Link Network Assistant Utility allows customers to easily discover multiple D-Link Smart Managed Switches within the same L2 network segment and display them on-screen for instant access. This allows for simultaneous configuration and basic setup of all discovered devices, including password changes and firmware upgrades. The DGS-1210 Series also supports D-View and Command Line Interface (CLI) through Telnet. D-View 7.0 is a network management system that allows for the central management of critical network characteristics such as availability, reliability, resilience, and security.

The Brand that is identified with the product.